An injection of anti-acne antibiotics could revolutionize the treatment of back pain.

British doctors are testing whether a one-time injection of a new drug known as PP353 can relieve – and even cure – chronic low back pain that affects millions of people.

The antibiotic kills bacteria that normally cause acne, but also lurk in damaged intervertebral discs in patients with back pain.

Three people have already been treated, and one said that a “dramatic” reduction in pain allowed her to resume swimming.

Common causes of back pain include herniated discs, arthritis, and spinal stenosis (where bones press on nerves), but it’s increasingly clear that bacteria play a role as well.

Slipped discs develop small blood vessels as part of the repair process, and this is believed to be how bacteria enter the disc. They then produce an acid which damages surrounding bones, irritates nerves and causes inflammation, resulting in pain. [File photo]

In a landmark 2013 study, Danish researchers found that in up to 40% of herniated disc patients, the damaged discs were infected with the bacteria Cutibacterium acnes.

Discs are pieces of spongy tissue that sit between and cushion the bones of the spine. When a person slips or hernias, most often due to age-related wear and tear, part of their soft core swells and can press on nearby nerves.

Cutibacterium acnes normally causes acne, but is also found in the mouth and can enter the bloodstream due to poor dental hygiene.

Slipped discs develop small blood vessels as part of the repair process, and this is believed to be how bacteria enter the disc.

They then produce an acid which damages surrounding bones, irritates nerves and causes inflammation, resulting in pain.

Studies have shown that oral antibiotics can relieve pain. But much of the drug is broken down before it reaches the spine, so the tablets need to be taken for at least three months to be effective.

Such prolonged use increases the risk of side effects, including diarrhea, abdominal pain, and loss of appetite, as well as concerns about antibiotic resistance, where bacteria develop the ability to overcome drugs meant to kill them. . 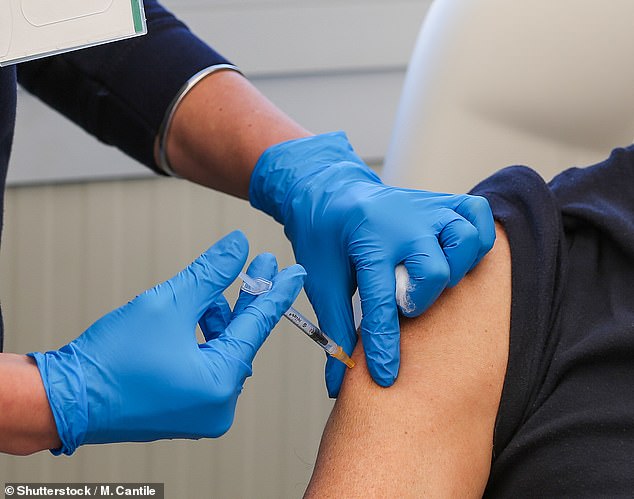 The new treatment, developed by Kent-based Persica Pharmaceuticals, involves injecting the antibiotic PP353 into the disc. This maximizes the amount of medicine that reaches the bacteria, allowing patients to be treated with a single injection, thus reducing the risk of side effects and antibiotic resistance.

Once injected, the PP353 solidifies, ensuring that it stays in the disc, preventing bacteria from growing and causing pain.

A preliminary test at hospitals in Preston and Coventry found it to be safe and well tolerated. One of the three trial participants, Scot Harris, 44, who has suffered from lower back pain for five years, said: “The pain has decreased dramatically, and I can swim again and lead a better life. normal that others take for granted. ‘

He added: “This groundbreaking work could transform the lives of millions of patients with chronic back pain.”

Implanted electrodes can relieve chronic lower back pain, according to a new study in British patients.

The electrodes, which are turned on and off by remote control, produce tiny electrical impulses to prevent pain signals from reaching the brain.

They can “bring substantial and lasting benefits to patients” who have traditionally had “few reliable treatment options,” say researchers at James Cook University Hospital in Middlesbrough.

Two years after receiving implants, 57% of 42 participants suffered at least half as much as before.

A similar number had significantly reduced pain, according to the journal Pain and Therapy.

Doctors at the George Washington University School of Medicine in the United States asked 38 women aged 40 to 65 to eat a low-fat plant-based diet that included half a cup (about 60 g) of soybeans cooked every day.

Sixty percent of participants experienced no hot flashes during the 12-week trial – although they typically got at least two a day, reports the journal Menopause.

Soybeans contain compounds called isoflavones that the body converts to equol, a plant form of the hormone estrogen.

A compound from the milk thistle plant is tested for weight loss. In a trial at the Catholic University of Murcia in Spain, 60 obese volunteers will take three silibinin capsules per day for three months. Researchers believe that the compound blocks the digestion of fat, thereby reducing the calories absorbed.

Retinitis pigmentosa is a group of genetically inherited diseases where the degeneration of photosensitive cells in the retina at the back of the eye causes vision loss.

It is hoped that the new drug, called NPI-001, will slow the damage caused by oxidative stress – the result of the body not producing enough antioxidants, allowing free radical molecules to damage tissue.

Animal studies have shown that the tablet, which contains an antioxidant, is effective. Scientists at the Queensland Eye Institute in Australia will compare it to a placebo pill in a trial involving 48 patients.

Quick exercise could be the best cure for a sick heart

One year of moderately vigorous weekly exercise in middle age may be enough to reverse signs of heart problems, according to researchers at UT Southwestern Medical Center in America.

They asked 31 adults in their 50s with early signs of heart failure – where the heart muscle becomes too weak to pump blood properly – to do yoga or more strenuous exercise (walking, cycling or swimming) for at least one hour a week, more regularly. strength training.

After a year, those who exercised more vigorously weekly had better heart function and healthier heart muscles. Those on the milder exercise regimen did not improve at all, reports the Circulation journal.

The findings add weight to the idea that “exercise is medicine,” according to the study.

Face mask to detect Covid in the wearer’s breath

A face mask that checks for Covid in the wearer’s breath was invented by scientists at Harvard University in America. The mask contains a tiny “biosensor” – a swab filled with biological material capable of detecting the virus.

The button-activated test gives a result in 90 minutes and is as accurate as benchmark PCR tests, reports the journal Nature Biotechnology.

“We have essentially reduced an entire diagnostic lab to a small, biology-based sensor that works with any face mask,” the researchers say. The technology can be adapted to detect other infections, as well as chemicals, they add.

They explain, “This technology could be incorporated into lab coats for scientists working with hazardous materials or pathogens, scrubs for doctors and nurses, or uniforms for first responders and military personnel.”

Commonly used to describe how quickly we digest food, metabolism actually covers a large number of chemical reactions that are constantly occurring in the body.

These fall broadly into two main types. The first is catabolism, where larger substances such as food are broken down, releasing energy. With the second, anabolism, smaller substances (such as nutrients in food) combine to form other substances, consuming energy.

Doctors use the term “basal metabolic rate” (BMR) to refer to the lowest basal energy level needed for these constant chemical reactions to take place, but we generally call this metabolism.

The rate of metabolism depends on age, gender, genes, and weight – young people, men, and those with more muscle tend to have faster rates. But there is no evidence that a slow metabolism is a cause of weight gain.

Autoimmune diseases – where the body attacks its own tissues – could be a cause of male infertility, suggests research published in The American Journal of Pathology.

Scientists found that mice lacking the AIRE gene, known to prevent the mistaken attack – including in reproductive organs – had lower sperm quality and were less fertile.

Dental hygiene adjustments that could make the difference. This week: Drink milk with meals

Although they are a good source of vitamins and proteins, milk and milk-based drinks should only be drunk with meals. This is because lactose – the sugar found in milk – can damage teeth, says Oga Eze, a dentist based in Essex.

“That’s why you shouldn’t leave milk near a child’s bed at night – if he drinks it constantly, the sugar can cause it to break down over time.

“After brushing your teeth at night, you shouldn’t drink anything other than water. And even then, only do it about 30 minutes after brushing, to avoid flushing out the fluoride that stimulates the enamel from the toothpaste, ”she adds.